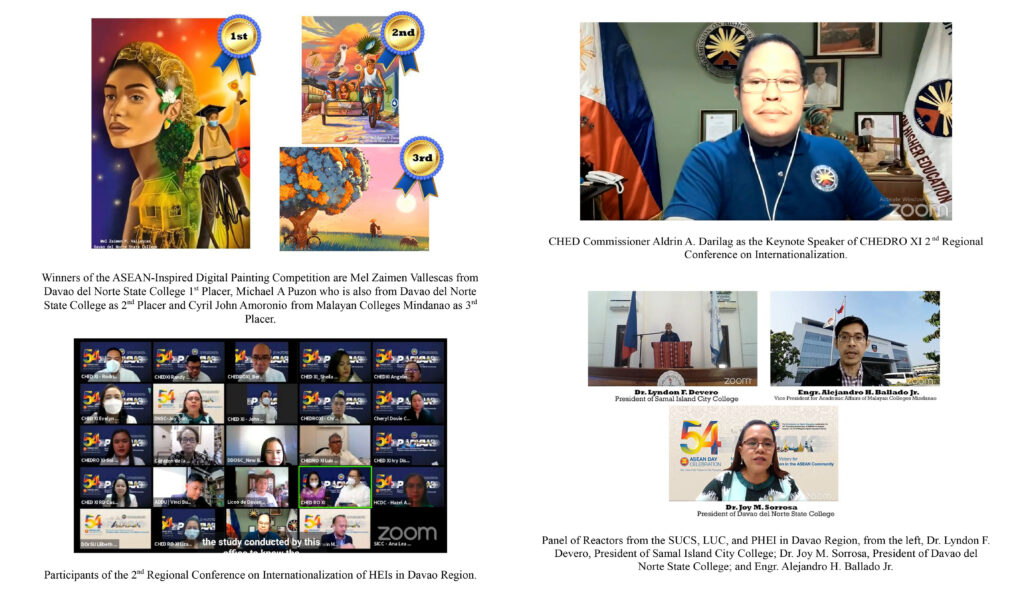 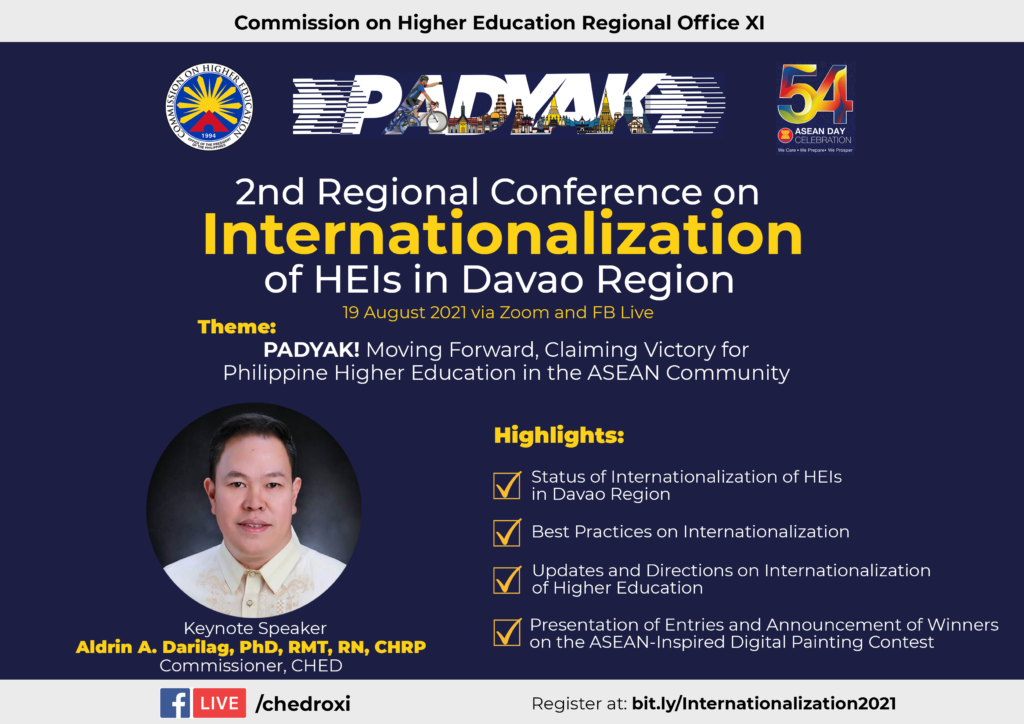 CHEDRO XI Commemorates 54th Founding Anniversary of ASEAN Pursuant to Proclamation No. 282 dated July 31, 2018 (amending Proclamation No. 1008 dated May 21, 2018), of which August is declared as “ASEAN Month” in honor of the regional bloc’s founding on August 08, 1967, the Commission on Higher Education Regional Office XI (CHEDRO-XI) joins the Philippine Higher Education Sector in building efforts to increase ASEAN awareness with the theme “PADYAK! Moving Forward, Claiming Victory for Philippine Higher Education in the ASEAN Community.”

The Commemoration was done through the conduct of two major activities such as the ASEAN-inspired Digital Painting Contest and the 2 nd Regional Conference on Internationalization of HEIs in Davao Region. The ASEAN-inspired Digital Painting Contest showcased the talents of students in Higher Education Institutions on digital painting and deepened ASEAN awareness by depicting the characteristics of ASEAN Member countries which the contestants illustrated.

The video has 12,812 views, and 20,828 reached. In her opening remarks, Dr. Maricar R. Casquejo, CHEDRO XI Director, established the background, rationale, and the continuity of the current activity to the previous years. She also enumerated victories of CHED through the leadership of Chairman Prospero E. De Vera III, with the CHED International Affairs Office headed by Atty. Lily Freida Macabangun-Milla, for Philippine Higher Education in the ASEAN Community.

CHED Commissioner Aldrin Arenas Darilag graced the Conference as the Keynote Speaker. In his speech, Commissioner Darilag emphasized the need to support internationalization practices and initiatives. “I reiterate my responsibility in pursuing our vision of one ASEAN – maintaining unity in diversity; and our mission of promoting regional peace and stability for the prosperity and welfare of all,” Com. Darilag said.

After the sharing of best practices, responses were given by Dr. Joy M. Sorrosa, President of Davao del Norte State College representing the State Universities and Colleges (SUCs); Dr. Lyndon F. Devero, President of Samal Island City College representing the Local Universities and Colleges (LUCs); and Engr. Alejandro H. Ballado Jr, Vice-President for Academic Affairs, Malayan Colleges of Mindanao representing the Private Higher Education Institutions (PHEIs). Before the end of the Conference, CHEDRO XI presented the entries and awarded the Winners of the CHED ASEAN-Inspired Digital Painting Contest. Among the 25 entries, three were given major prices while 10 received consolation prizes.

Aside from the three winners, 10 other entries received consolation prizes with P2,000.00 each. The Celebration of the CHED RO XI on the Commemoration of the 54 th Founding Anniversary of ASEAN for this Year received favorable reactions from its stakeholders based on the messages in the Facebook and Zoom chat box. As such, the CHED RO XI is thankful on the support and cooperation given by the CHED Central Office and the Presidents/Heads of the 105 HEIs in the Region among other stakeholders.